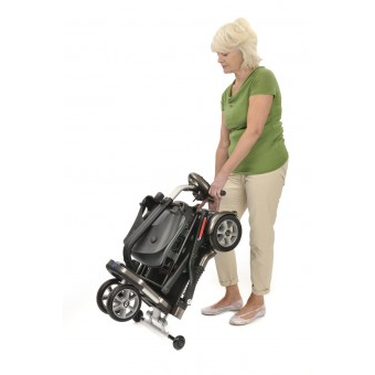 The Minimo is a new transportable scooter made by market leading manufacturer TGA Mobility. Not just a new product, the Minimo is also a new concept – a fully foldable scooter. As one would expect from its name, the Minimo is small. This makes it ideal for transport between locations, and great for storage.

While most "boot scooters" require dismantling before they can be transported, the Minimo doesn’t require any – instead, it can be folded. Extremely compact, it will fit in nearly every car boot – also making storage simple. The folding design also makes it incredibly easy to transport, with no need to lug around several parts, making it ideal for those wanting to frequently move the Minimo between locations, for example on coach or cruise holidays.

The "stripped-down" approach needed to make the Minimo so lightweight does mean that it misses out on some of the comfort features found on other scooters. In particular, the seat doesn`t have much padding to it, while the handlebars aren’t as ergonomic as those found on many other boot scooters. However, it is both stable and manoeuvrable, due to the distinctive twin front wheel arrangement, allowing it to negotiate shops and cruise ships with ease.

Overall, the Minimo is somewhat of a niche product, ideal for people wanting a super-compact scooter for occasional use that doesn`t take up too much space, and which can be easily transported.