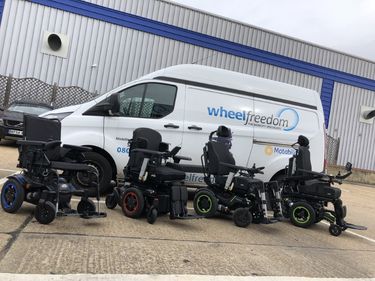 Sunrise Medical’s much-anticipated Q-Series powerchairs have now been officially released, and are available now from Wheelfreedom. As Quickie Powered Wheelchair Dealer of the Year and a Sunrise Medical Elite Dealer, we were given exclusive early access to these powered wheelchairs, including demonstration models, and so can bring you our insights on these advanced powerchairs.

Following Sunrise Medical’s acquisition of Handicare a couple of years ago, the new Q-series powerchairs combine the best of both, with aspects of the market-leading Salsa, Jive and Puma ranges brought together and improved with new technology. It would be remiss of us not to mention the outstanding appearances of the Q-series powerchairs, which have raised the bar in terms of sleek and stylish looks.

We have already profiled the entry-level Q100 which launched back in July, and whose ultra-compact base gives it unmatched manoeuvrability. This has proved incredibly popular, as the narrowest truly-outdoor capable powerchair on the market – allowing you to access places that other wider wheelchairs can’t fit, and giving you an easier drive – ideal for those who’ve found themselves scraping walls and doorframes from time to time!

The Q500 range includes your choice of mid, rear and front-wheel drive and is the “all-rounder” in the range – ideal for those that want a single powerchair that excels both indoor and out. The mid-wheel drive Q500 M replaces the Salsa M2, and one notable improvement we’ve seen is to the anti-pitching technology that now provides a much smoother braking experience.

The Q500 R and Q500 F have replaced the Puma 40 – previously the Puma 40 had some compromises to the suspension to allow it to be easily switched between rear and front wheel drive. Realistically, people stick with either one or the other, and by developing the Q500 R and Q500 F as separate power bases has allowed significant improvements to the suspension that now gives a stiffer, more responsive ride, as preferred by most experienced powerchair drivers.

All the Q500 models feature the highly-configurable Sedeo Pro seating – a step up from the old Salsa seat, now boasting a much wider range of adjustability, improved comfort and support, and a sleeker look – a big improvement on the somewhat “industrial” look of older seating systems.

The Q700 range is a level above, with the focus on outdoor performance. The Q700 M replaces the renowned Jive M powerchair, with the gas-dampened suspension upgraded to more durable Spidertrac 2.0, addressing a reliability issue that a few people had experienced when making heavy use of the Jive M. While the rear and front-wheel drive Q700 R and Q700 F may appear similar to their Q500 counterparts, the Q700s have suspension on the casters giving a much softer ride. For those with back problems or who struggle with being jolted around on uneven surfaces (like most London pavements, sadly) the even ride is really noticeable.

Three different seating systems are available – the Sedeo Pro, as found on the Q500s, is standard. However, the Q700 M, Q700 R and Q700 F can also be supplied with Sunrise’s top level Sedeo Ergo seating system – ideal for those with clinical needs, as it fully supports your body as you transfer between positions and lets you lie flat with up to 175° of anti-shear powered recline.

Finally, the Q700 mid and front-wheel drive bases are available in standing variants – the Q700-Up M that we profiled last month, which has now been joined by the Q700-Up F for those that prefer the front-wheel drive more traditionally found on standing powerchairs. Replacing the Jive Up, the Q700-Up features a completely redesigned stand function that uses the Sedeo Ergo seat for what we have found to be a reliably ultra-smooth and extremely quiet stand.

We will continue to put the Q-series powerchairs through their paces, and will be bringing you more feedback in the future – including exclusive comparisons to other ranges such as Invacare’s TDX series and Pride’s Quantum powerchairs. If you’d like to arrange your own test drive of the Q-series range call us on 0800 0258 005, or contact us through our Facebook page, or via Twitter @Wheelfreedom.